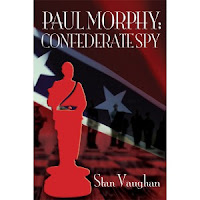 I could hardly wait to pick up Paul Morphy: Confederate Spy. The American chess champion from Louisiana, cast as an undercover agent during the War Between the States!

First, though, I had to set aside my concerns about the author, Stan Vaughan, of the American Chess Association (as opposed to the better known United States Chess Federation) and claimant to the World Chess Federation World Champion title (as opposed to the better known FIDE). There was more than a bit of trepidation in reviewing the July 1, 2011 WCF Top rating list, since there seemed to be a few players missing:

However, I took the leap.

The author writes from the omniscient, third person point-of-view, fully strident in a way that befits the Southern perspective of American Civil War

According to Article I, section 8 of the US Constitution, only US Congress has the power to call forth state militia (and even then it must be as a result of a call for assistance from a state legislature, or when said state's legislature is not in session, its governor). Yet, once the trespassers had been evicted from Fort Sumter, which should have been the end of the matter, Lincoln usurped this authority and issued his own illegal proclamation call on April 15, 1861. Not only was it illegal from the standpoint that he had no authority to issue it, it called for suppression of a so-called insurrection in South Carolina, a state no longer even part of the Union, as South Carolina had seceded the previous year!

Whew! As a Yankee, I was quickly getting schooled on Dishonest Abe Lincoln and his War of Northern Aggression. Of course, I awaited the author's treatment of the "Peculiar Institution", which was not immediately forthcoming...

I tripped over an occasional mismatch in verb tenses and some misspellings that should not have been there, but I was settling into a tale set in a vibrant time in chess and non-chess history.

The presentation of the chess games seemed a bit silly, however, placing "annotations" within the dialogue, e.g.

Still, things moved along, and Morphy, in the role of diplomat, found himself across the Atlantic, in Spain... and the style of writing in Paul Morphy: Confederate Spy changed from politics and intrigue to more of a travelogue. I rode it out for about a dozen pages (like so much of the book, the places and buildings were interesting, even if I struggled with the prose), and then parked myself on a couple.

The phrase "characterized by a magical use of space, light, water and decoration" (page 62) describing a particular piece of architecture caught my eye, and I Googled it. Hmmm... That phrase shows up in the DK Eyewitness Travel Guide: Seville & Andalusia (page 194).

Somewhat disappointed, I then chose "where the reigning sultan listened to the petitions of his subjects and held meetings" (page 62) and Googled that, only to find that the phrase is also from DK Eyewitness Travel Guide: Seville & Andalusia (page 194).

It turned out that "an undigested cube of rock, and whoever designed it failed to realize that when plumped down beside the delicate Moorish palaces upon which it encroaches, it could only look ridiculous" (page 63), however, appears in Iberia, (page 227) by James A. Michener.

I set the book down. I do not know if I will pick it back up again.

Pity. I was just getting into the story.

I wonder how things turned out in the end.

From a French Chessplayer in France: S.Vaughan's book has been reviewed and corrected on December 17, 2010 ---yes, 2010 --- and the correction of more 200 French words or locutions has been sent to HenschelHaus Publ.Inc.Milwaukee, WI to the attention of Mrs Kira Henschel for a new ans revised edition in Spring 2011 ... still not published now. I can put the corrected list to your disposal if wanted.
Regards,
Gilles DAVID
davidgil49@free.fr

Je parle le Français comme une vache Espanol... I, too, was disappointed by the author's Franglais.

Hopes for a corrected second edition have so far not been realized.

Sad. The tale has much potential.

I wonder if anyone has read Frances Parkinson Keyes' book about Paul Morphy. It is also a novel in which Morphy is portrayed as a spy. Is there a connection?